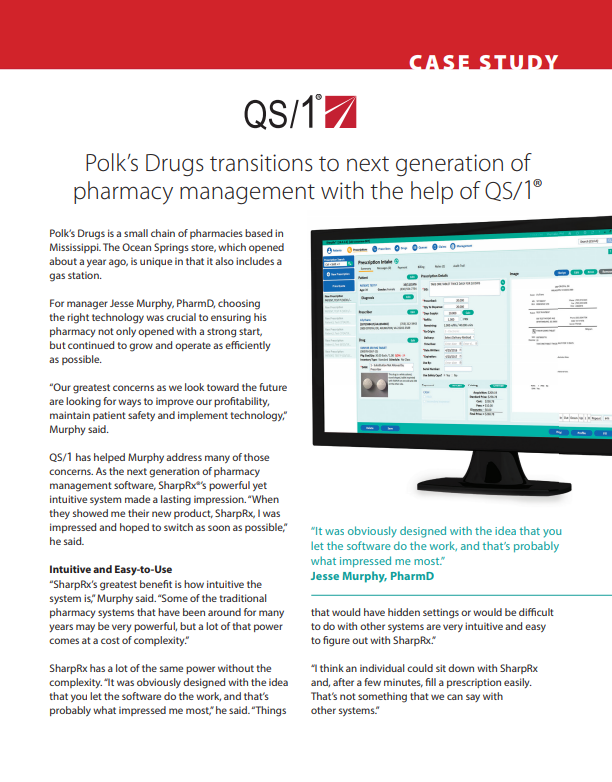 Polk’s Drugs is a small chain of pharmacies based in Mississippi. The Ocean Springs store, which opened about a year ago, is unique in that it also includes a gas station.

For manager Jesse Murphy, PharmD, choosing the right technology was crucial to ensuring his pharmacy not only opened with a strong start, but continued to grow and operate as efficiently as possible.

“Our greatest concerns as we look toward the future are looking for ways to improve our profitability, maintain patient safety and implement technology,” Murphy said.

QS/1 has helped Murphy address many of those concerns. As the next generation of pharmacy management software, SharpRx®’s powerful yet intuitive system made a lasting impression. “When they showed me their new product, SharpRx, I was impressed and hoped to switch as soon as possible,” he said.

“SharpRx’s greatest benefit is how intuitive the system is,” Murphy said. “Some of the traditional pharmacy systems that have been around for many years may be very powerful, but a lot of that power comes at a cost of complexity.”

SharpRx has a lot of the same power without the complexity. “It was obviously designed with the idea that you let the software do the work, and that’s probably what impressed me most,” he said. “Things that would have hidden settings or would be difficult to do with other systems are very intuitive and easy to figure out with SharpRx.”

“I think an individual could sit down with SharpRx and, after a few minutes, fill a prescription easily. That’s not something that we can say with other systems.

The fact that the system is so easy to use has made it easy to train others as well, Murphy said. “What may have taken weeks or months to get accustomed to with previous software, now often only takes a couple of days.”

What’s more, a lot of SharpRx’s features are exactly where you would expect them to be, he related. “They make sense from a workflow standpoint or from an organization standpoint,” he said. “One of the best things about it is that it keeps the important tools front and center. They’re very easy to find, they’re in logical places, and it’s very easy for you to navigate to the different elements. You’re not overwhelmed with too much information or too many functions. But if you need additional functions, they’re easily accessed.”

That’s something that other platforms he has used haven’t always done a good job of handling, he said. “They either overwhelm you with too much or give you too little control.”

SharpRx makes using multiple screens easy as well – something Murphy and his staff really like since they may have many screens open at one time. “We really like the multi-screen features. It allows us to view multiple patients, multiple prescriptions and multiple drug or prescriber entries without having to leave what we’re doing.”

“Phone calls are no longer a problem because it’s easy to switch to a new patient and access what they are looking for, fill prescriptions, add refills to our queue and then immediately go back to what we were doing. It’s very easy to leave what we’re doing, go to a different task and switch back without losing a step,” he said.

“Another benefit is we can update our prescription forms, and make them clearer and easier to read,” he said. “And, we can do it within minutes ourselves.”

Similarly, SharpRx has helped the pharmacy overcome one of its biggest challenges – label creation. “One of the biggest issues we had with past systems is when you wanted to make a change to the label.”

Rather than requiring requests for changes from a third party, “SharpRx has a simple drag-and-drop format to adjust forms, so you can make a change immediately,” he said. “It takes a fraction of a minute to make and save, and you can see the results right away. That saves a lot of time.”

Murphy said SharpRx has done a lot to simplify some of the more difficult aspects of processing prescriptions. “We no longer struggle with adjudication and inventory,” he explained. “It speeds up the processing of prescriptions so our customers are in and out very quickly. It has a very good system for tracking prescriptions so that we can pinpoint when and where a prescription was filled and picked up and when that patient would be due for the next fill. It has done a really good job of helping us maintain our inventory so that medications are not out of stock as frequently.”

“Adjudication is something that is always a struggle with any pharmacy system,” he said. “With SharpRx, most prescriptions go through without any intervention on my part. We no longer have to continually work to get prescriptions to adjudicate perfectly. The software handles most of that.”

“As part of our transition, we also switched signature management from paper to electronic. That has always been a difficult thing to do in prior systems. With SharpRx, it’s easy to access and retrieve those signatures,” Murphy said.

What’s Most Important in a Pharmacy Management System?

When choosing a pharmacy management system, Murphy said the system must be powerful enough to handle the challenges a busy and ever-growing pharmacy faces. Yet, it must be intuitive enough so that staff can begin processing prescriptions quickly.