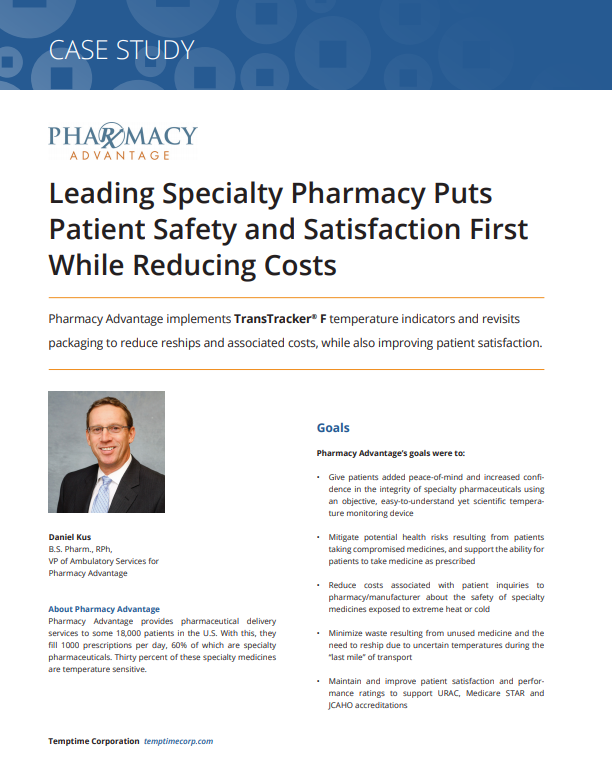 Pharmacy Advantage’s goals were to:

• Give patients added peace-of-mind and increased confidence in the integrity of specialty pharmaceuticals using an objective, easy-to-understand yet scientific temperature monitoring device

The Pharmacy Advantage team holds regular Quality Assurance (QA) meetings to review customer feedback. It was during one of these sessions that patient concerns about the temperature of shipments began to emerge.

“We review both positive and negative comments in each meeting,” said Daniel Kus, VP of Ambulatory Services for Pharmacy Advantage. “We noticed that over a six month period, from spring into summer, we were receiving more and more calls from patients wanting to know if their medicine was still good.” The concerns arose, Kus noted, because packages might be delivered later on a hot summer day or left on the doorstep when no one was home. As a result, patients were unsure if the medicine would still be considered effective.

“There seemed to be a gap in the last mile, and we didn’t have the scientific data to make a confident recommendation to the patient,” explained Kus. “There was also no formal process in place to address temperature concerns, so of course we’d end up replacing the product.”

Based on the findings of the QA meeting, as well as conversations they had recently had with Temptime, Pharmacy Advantage decided to participate in a pilot study along with four other specialty pharmacies. In this study, Temptime’s TransTracker® F temperature indicators were added to the packages of temperature-sensitive medications being delivered to patients with chronic diseases. Patient preferences and insights were then measured and analyzed.

“We want to be proactive, whether that involves making improvements to software, shipping, operations or patient satisfaction,” stated Kus. “We saw the pilot study as an opportunity to find out what more we could be doing – not only to benefit the patients we serve, but also to potentially make an impact on our bottom line.”

According to Kus, the results of the pilot study were compelling to Pharmacy Advantage.

• 49% of respondents said they’d been concerned in the past about the temperature of medicine delivered from a specialty pharmacy, whether being too hot or too cold

As a result of the study, Pharmacy Advantage did some further investigation into various temperature indicators on the market. They ultimately chose TransTracker based on their experience with the pilot study and patient feedback.

“TransTracker is easy for our patients to read,” Kus noted. “It’s a patient-friendly device, and when we include it with our patient instructions, they can quickly and easily determine the integrity of the shipment on their own. It’s a simple solution to a potentially complicated and expensive problem.”

At the same time they began to move forward with implementing Temptime’s temperature indicators, Pharmacy Advantage had an opportunity to meet with Cold Chain Technologies (CCT), a thermal packaging supplier. As a Temptime business partner, CCT provided a complementary evaluation of their packaging, which Kus described as an ancillary benefit of the pilot study and engagement.

“During this process, we learned instantly that many specialty pharmacies use a completely incorrect packing process, putting freeze packs into the shipping container and returning the package to the freezer,” said Kus. “This practice, we discovered, could freeze the product and cause damage before it is even sent out.”

In 2013, Pharmacy Advantage began including TransTracker in all heat-sensitive or perishable pharmaceutical items delivered to a patient’s home. Additionally, the company made improvements to their shipping materials and packing processes. “These combined initiatives support Pharmacy Advantage’s goal of best practices in the last mile of shipping,” Kus said.

Not long after implementing the temperature indicator, 450 Pharmacy Advantage medication recipients participated in a survey. A solid 97% said that they prefer a specialty pharmacy that uses the TransTracker indicator in its shipments. They also reported that the indicator enhanced their confidence in the security and effectiveness of their prescription medication.

Kus went on to note that eliminating just one compromised shipment more than covers the cost of temperature indicators for an entire year. With the average specialty pharmacy shipment valued at $2000 per month, and some as high as $5000 to $10,000, the financial payback alone is a significant incentive.

“Beyond the cost of the medication, any disruption in patients taking medicines as they are intended is of major concern to both us and the health plans,” he said. “We don’t want to see clinical outcomes reduce, or ER visits and hospitalizations increase as a result of last mile problems that temperature indicators can simply and effectively address.” In addition to patient safety and cost savings, Kus cited a number of other benefits – including URAC, Medicare STAR and JCAHO accreditation as well as maintaining high levels of patient satisfaction to strengthen relationships with payors and pharmaceutical manufacturers.

“We want to map the journey of shipments over different seasons and with different packing materials to study where freezing or overheating might be occurring,” Kus explained. “Understanding the temperature profile over the entire last mile and then learning what we can do to keep the medication as stable as possible is our next challenge.”