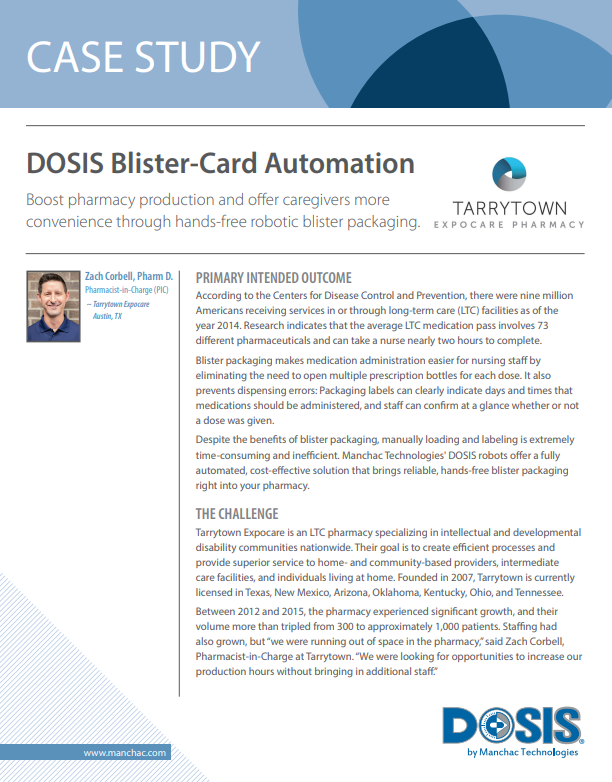 According to the Centers for Disease Control and Prevention, there were nine million Americans receiving services in or through long-term care (LTC) facilities as of the year 2014. Research indicates that the average LTC medication pass involves 73 different pharmaceuticals and can take a nurse nearly two hours to complete.

Blister packaging makes medication administration easier for nursing staff by eliminating the need to open multiple prescription bottles for each dose. It also prevents dispensing errors: Packaging labels can clearly indicate days and times that medications should be administered, and staff can confirm at a glance whether or not a dose was given.

Between 2012 and 2015, the pharmacy experienced significant growth, and their volume more than tripled from 300 to approximately 1,000 patients. Staffing had also grown, but “we were running out of space in the pharmacy,” said Zach Corbell, Pharmacist-in-Charge at Tarrytown. “We were looking for opportunities to increase our production hours without bringing in additional staff.”

As a cycle-fill pharmacy, Tarrytown’s process is designed to ensure that patients avoid any lapses in therapy due to expired refills. Similar to what is known as “pre-packing,” all of Tarrytown’s prescriptions are filled in advance for the first of the following month. They have 12 focused business days of production time for each cycle, and 100% of the solid oral-dose medications they provide are delivered in blister packs. As business grew, Corbell knew they would need to find the right solution.

“We knew what we wanted to get out of DOSIS,” Corbell said. The hope was that adopting automation for a large portion of their blister packaging needs would give the techs “more breathing room in their workflow.”

As with any new technology, there were anticipated hurdles in integrating the machines, such as potential changes to Tarrytown’s labeling. “Any change in medication labels can cause anxiety and stress to the providers,” Corbell said. Fortunately, DOSIS provided the answer to that concern, as well.

Tarrytown Expocare now operates three DOSIS L60 units that fill, seal, and label between 18,000 and 20,000 cards per month. “When the machines are queued up with thousands of orders, we will typically get as much as seven or eight hours of additional production time from the machines after all of our employees leave for the day.”

DOSIS offers an enhancement in their mPAQ Printing system, which integrates with pharmacy management software to format and route all labels printed throughout the pharmacy. The mPAQ system allows the information that is printed on the blister packs to be fully customized.

“Manchac support took our existing label format that we had been using for years and recreated it on the DOSIS label template,” Corbell said. “Our providers were OK with it, because all of the information was in the same spot on the new labels.”

DOSIS provides other formatting enhancements, including color-coded med-pass and time-pass tools that add even more efficiencies. “On a new location check, the nurse had four different colored sticky pads and was writing the hour of administration on each pack. I knew we could do better than that with DOSIS,” Corbell said.

In addition, LTC providers all have individuals who leave their home or facility to attend workshops or other off-site activities. “We had DOSIS add a time-pass flag to the mid-day dose cards that are split out so they can be easily identified and sent to the workshop locations for the month.”

Labels can be formatted to include other data that can be useful even before the prescriptions leave the pharmacy. “Data on our labels drives many steps of our workflow,” Corbell said. “Since we are a cycle-fill pharmacy, a large percentage of our monthly dispensing leaves here in a short amount of time – two to three days each month. Using mPAQ, we have streamlined our sorting procedures to make getting blister packs to appropriate locations very easy using the sorting data we have printed on each label.”

In addition to label customization, mPAQ’s zone-based printing option routes labels to numerous zones. This advantage reduces missing labels and label-sorting mistakes, and cuts down on the need for technicians to repeatedly walk from workstation to printer. “Before DOSIS, we were printing 100% of our labels on a single printer. One tech would spend an entire day standing there, folding the labels and replenishing the roll. We have six or seven printers now.”

Through DOSIS, the mPAQ software is also able to produce labels for those blister packs that must still be filled by hand. “Fully 100% of the prescriptions that go out our door are printed by DOSIS and mPAQ,” Corbell noted.

Before DOSIS, Tarrytown’s blister packs were all filled by hand during regular business hours, necessitating a real production crunch two times a month. “The biggest impact that DOSIS has had in the pharmacy is the ability to continue production after hours with no technician present,” said Corbell.

A single technician is dedicated to staffing the three L60 machines that produce more than a third of the pharmacy’s output. A team of seven technicians manually pulls and packages the remaining meds, which require pill-splitting or other special handling.

“Upward of 40% of our cycle fill being produced by a single technician using the DOSIS machines is definitely significant when you are looking at the bottom line,” Corbell said. The pharmacy continues to grow, and while Corbell is confident that their three DOSIS robots will be able to keep up with that pace for another year or so, he said, “we are already considering purchasing another machine.”