Kindeva Drug Delivery is a contract development and manufacturing organization (CDMO) specializing in complex drug formulation and delivery. Seeking to scale its production of coated transdermal devices for a biologic API, the company enlisted systems integrator Keller Technology to design, build and integrate an aseptic dip coating system. Because the application demands extreme precision, the solution would depend on a Stäubli robot.

In the effort to bring life-changing medicines to a highly regulated market, pharmaceutical manufacturers must maintain a delicate balance between volume, repeatability and sterility. Drug delivery systems like those developed by Kindeva are the culmination of a series of carefully coordinated steps, where the API meets the patient. Preserving the sterility and efficacy of the product, and ultimately the safety of the patient, is paramount.

With a nearly 175-year history, Kindeva has played a role in bringing hundreds of drug products to fruition. Among the Minnesota-based company’s innovations is a proprietary solid microstructured transdermal system (sMTS) platform. The microneedle-based device is highly patient-friendly, making it ideal for self-administering abaloparatide, a biologic that stimulates bone formation for postmenopausal women at high risk for bone fractures due to osteoporosis.

Since abaloparatide is a biologic API, it cannot be terminally sterilized. Therefore the processes involved in coating and packaging the abaloparatide-sMTS combination must take place entirely within an ISO Class 5 environment. In the lead-up to an NDA filing, Kindeva sought to reduce the product’s manufacturing cycle time. Only an automated system, capable of operating optimally within an aseptic isolator, could accomplish all of this.

The company turned to Keller Technology, a trusted partner with extensive experience in robotic applications for controlled environments in biotech and pharmaceuticals, including combination products like Kindeva’s sMTS. It was up to Keller, as the systems integrator, to identify a key component: a robot that meets all of the customer’s specifications.

The right robot for a sensitive environment

Stäubli Robotics was the clear choice to complete the triumvirate of expertise required for the sterile coating and packaging system. The company has a strong record of innovation in the automation of life science applications in hygienic and aseptic environments. Its full Stericlean range of robots is designed specifically for sterile use.

A variety of features enable Stäubli’s Stericlean robots to operate in a Grade A environment and maintain high performance under strict aseptic conditions: A fully enclosed structure with special seals keeps airborne particles to a minimum. The robot’s completely smooth surface, protected by a high-resistance coating, eliminates retention areas where antigens can proliferate. This design also enables the robot to withstand harsh VHP decontamination processes. All connections run through the base of the robot, safely outside the isolator.

Past experience was also a factor in choosing a robotics supplier. Keller had been integrating Stäubli robots successfully for years in various applications – including a Stericlean for a nearly identical sMTS application for Kindeva. They knew exactly what to expect: exceptional cleanliness, repeatability and accuracy. A Stericlean six-axis robot, exceeding Kindeva’s requirements with an ISO Class 4 rating, was selected for integration into the system.

The system Keller devised performs precision dip coating as well as primary packaging, all within an aseptic isolator. It begins when the sMTS devices are transferred into the isolator on trays, while the sterile liquid API is fed into a coating system, designed previously by Keller.

The Stericlean’s pinpoint accuracy is critical in the dip coating operation that follows. The stamp, and immerses them in the liquid API bath, loading the microneedles with the biologic API. The process is carefully calibrated to achieve a uniform coating on each unit, resulting in high repeatability.

The robot then lifts the coated sMTS out vertically, carefully places it back on the tray, and repeats the process at a constant speed. Once the tray is full, it is transferred to a tray sealer, also custom-designed and built by Keller. The sealed trays are transferred out of the isolator, completing the sterile primary packaging operation.

The isolator itself is equipped with a monitoring system to ensure that no septic antigens are present. It also provides laminar airflow, so the entire body of air within the isolator is uniform in velocity and direction. Likewise all system components are designed to minimize airflow disruption – as exemplified by the sleek, fully enclosed structure of the Stericlean robot. This prevents disturbances such as eddies, voids and shadows that could retain antigens.

What has traditionally been a slow and difficult manufacturing process – made all the more complex in pharmaceutical applications – is transformed by the inventiveness of Keller’s automated system, along with the precision and repeatability of the Stäubli robot.

Crucially, the risks that are inherent to exposing a biologic API such as abaloparatide during dip coating are eliminated. Keller engineered and integrated its customized system into an aseptic isolator to maintain sterile conditions and shield the product from contamination. The specialized design of the Stericlean robot brings added assurance. This protects the operators, the product, and ultimately the patient.

While careful precautions are taken at every step of the production process, the automated system also delivers the high speed and efficiency Kindeva needed to achieve its goal of reducing its abaloparatide-sMTS combination product’s manufacturing cycle time. Speed and efficiency gains, through automation, have also enabled the company to scale up the product for commercial manufacture. Further, the enhanced traceability provided by the robot’s control software optimizes process control, which has the potential to bring long-term benefits for years to come. 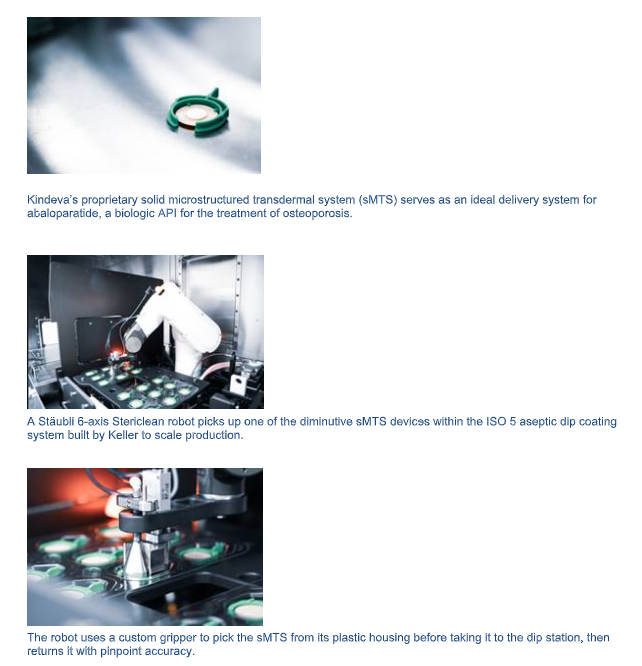 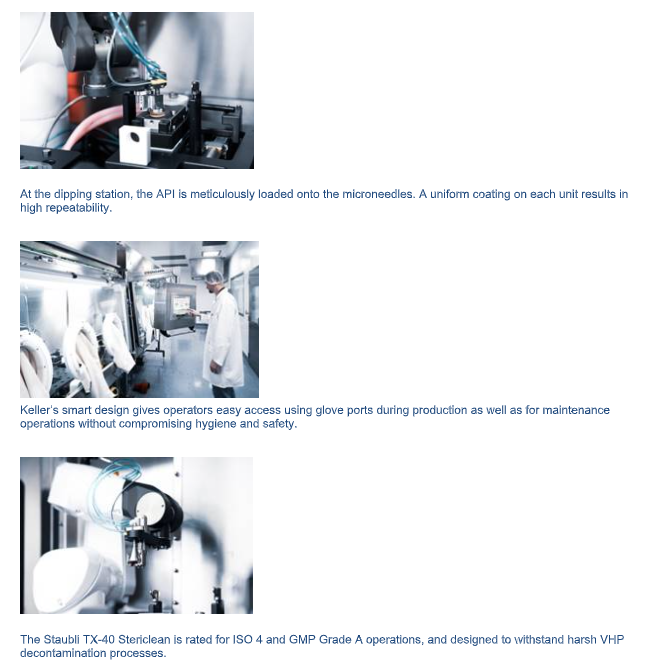