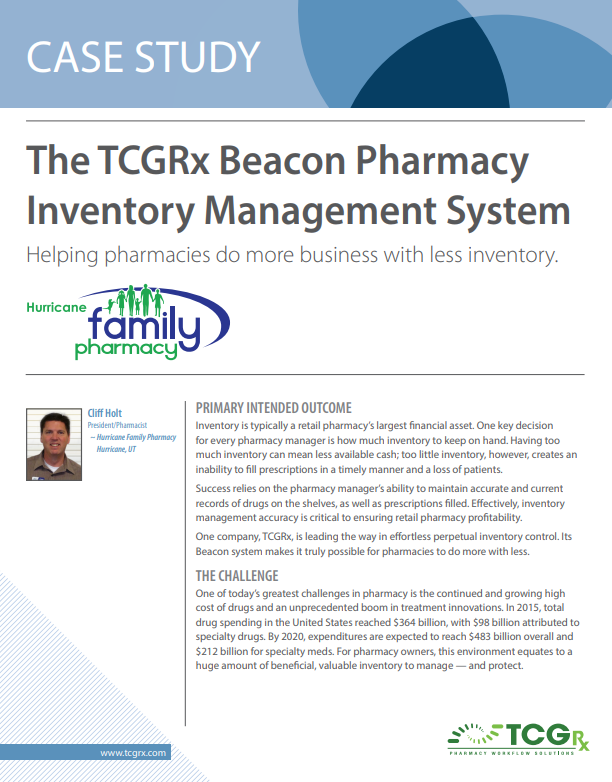 Inventory is typically a retail pharmacy’s largest financial asset. One key decision for every pharmacy manager is how much inventory to keep on hand. Having too much inventory can mean less available cash; too little inventory, however, creates an inability to fill prescriptions in a timely manner and a loss of patients.

Success relies on the pharmacy manager’s ability to maintain accurate and current records of drugs on the shelves, as well as prescriptions filled. Effectively, inventory management accuracy is critical to ensuring retail pharmacy profitability.

One company, TCGRx, is leading the way in effortless perpetual inventory control. Its Beacon system makes it truly possible for pharmacies to do more with less.

One of today’s greatest challenges in pharmacy is the continued and growing high cost of drugs and an unprecedented boom in treatment innovations. In 2015, total drug spending in the United States reached $364 billion, with $98 billion attributed to specialty drugs. By 2020, expenditures are expected to reach $483 billion overall and $212 billion for specialty meds. For pharmacy owners, this environment equates to a huge amount of beneficial, valuable inventory to manage — and protect.

The first Hurricane Family Pharmacy location opened in 2009 in Hurricane, Utah. Pharmacist and company president, Cliff Holt, recalled those early days, when “you would just pray for [a customer] to walk in the doors.” Those worries didn’t last long, as the business quickly grew. Today, Hurricane cares for more than 14,000 patients in their community. The pharmacy’s growth led to some new needs in terms of drug packaging and inventory management.

“About a year and a half ago, we outgrew the packager we had been using,” said Holt. They needed something new. He'd heard about TCGRx and decided to visit their home office in Powers Lake, Wisconsin, where he was also introduced to the Beacon Inventory Management System.

Holt was impressed by the model pharmacy TCGRx houses on-site and, in particular, the compact layout maximizing its footprint. “I couldn't quit thinking about that. I was out of space — we were running out of room in the bays, and I had two pharmacists working at one counter, along with one filling technician — there wasn't an inch to spare.”

Hurricane's drug storage footprint was reduced by more than 50%, allowing more space for filling of prescriptions. Workflow increased, thanks to three high-density filling stations located right where the technicians stand, and instead of one filling technician, Holt now has three. “The drugs are literally in reach now,” said Holt, “not steps away, but actually within arm’s reach.”

At the same time that revenues were growing, Hurricane’s inventory was reduced by $200,000. This is possible because Beacon’s perpetual inventory system knows exactly what drugs are on the shelves, in what amounts, and accurate expiration dates. “Beacon knows the dollar value of our inventory down to the penny,” Holt said. That knowledge alone is an outstanding ROI.

In addition, Beacon prevents unnecessary and costly waste. For Hurricane, what used to be one or two bins of expired drugs each month has been reduced to less than half of one bin. “That kind of waste really bothered me,” Holt said. Now when an order is made, Beacon pulls medications in order of return-to-stock drugs first, partial bottles next, and then shortest expiration time. Losses due to expiration dates are simply no longer an issue.

Using Beacon makes sense from a sustainability standpoint, as well. “Every other piece of technology we’ve had, we have outgrown and had to scrap,” said Holt. “[With Beacon] I can simply keep adding on and incrementally increase the system as we need it.”

Beacon offers pharmacy managers the opportunity to reduce and control their inventory, streamline and increase workflow efficiency, and boost patient care and consultation time. All of this is possible without remodeling the pharmacy or imposing a huge learning curve on pharmacy staff, and with no lapse in patient safety

Hurricane's business grew from 400 filled prescriptions a day before Beacon, to an average of more than 600 today — with the same number of staff members and more than a 50% reduction in the drug storage footprint. And they haven’t hit capacity yet. “We could handle another 30% or 40% increase in growth right now, the way things are laid out with Beacon,” Holt said. 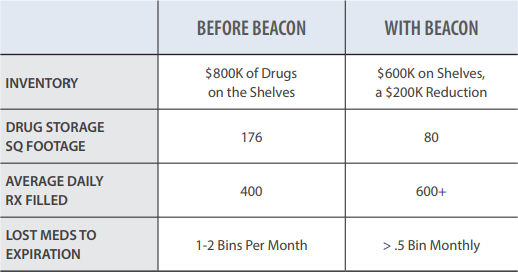