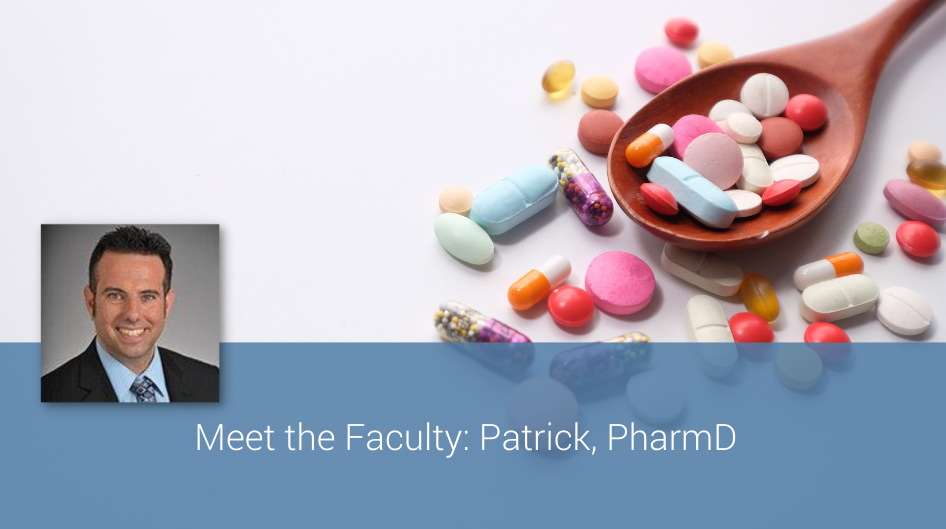 Meet Patrick!  Patrick is a 2003 graduate of the University of the Sciences. He has worked in several positions throughout his career including retail, hospice, and managed care pharmacy. He started his career as a clinical pharmacist working with the hospice population Patrick worked with physicians and nurses to manage a variety of end of life conditions including pain management as well as anxiety and depression. Patrick quickly learned the hospice population was quite different then what he was used to in that the main focus was symptom management as opposed to active treatment of diseases.

After working with as a clinician, Patrick transitioned into managed care with a position within one of the biggest health plans in the Philadelphia area where he was responsible for managing the formulary benefits for over a million members within the commercial and Medicare markets. Patrick was able to use his skills to ensure the formulary had adequate coverage of medications while also ensuring financial sustainability for the members paying their premiums. Patrick found this rewarding in that his work had an impact on a large population of members.

After working on the health plan side of managed care, Patrick obtained a position within a pharmacy benefits manager (PBM). This PBM focuses mostly on Medicaid health plans throughout the country.  At first, Patrick was assigned to support Medicaid health plans in Michigan and California where he quickly realized that there were nuances in thinking and treatment in different areas of the country even though the general concepts to formulary management were the same the approaches were slightly different. Patrick also had the opportunity to serve on the state of Michigan's consensus formulary workgroup that was responsible for setting the formulary for all Medicaid members in the entire state. Patrick then progressed to supervisor of formulary and then manager of formulary where he oversees a team of pharmacists that support health plans across the country which serve several million members.

Patrick decided to become a pharmacist to help people. He enjoys helping people on the population level since he can have the biggest impact on the most people. Patrick also likes the ability to balance his clinical skills with the financial constraints of the real world and is particularly interested in the management of some of the newer agents like gene therapy which are extremely expensive.

Patrick has also served as a volunteer firefighter for 26 years. He has held multiple positions within the fire company including junior firefighter, firefighter, engineer, assistant chief and training officer. His experience has allowed him to help people when they are at their lowest point.

Jefferson College of Pharmacy (JCP), an integral part of one of the nation’s premier academic healthcare centers. Founded in 2008, we have built an innovative Doctor of Pharmacy program that effectively prepares our graduates for interesting and challenging pharmacy practice roles across the health care continuum.