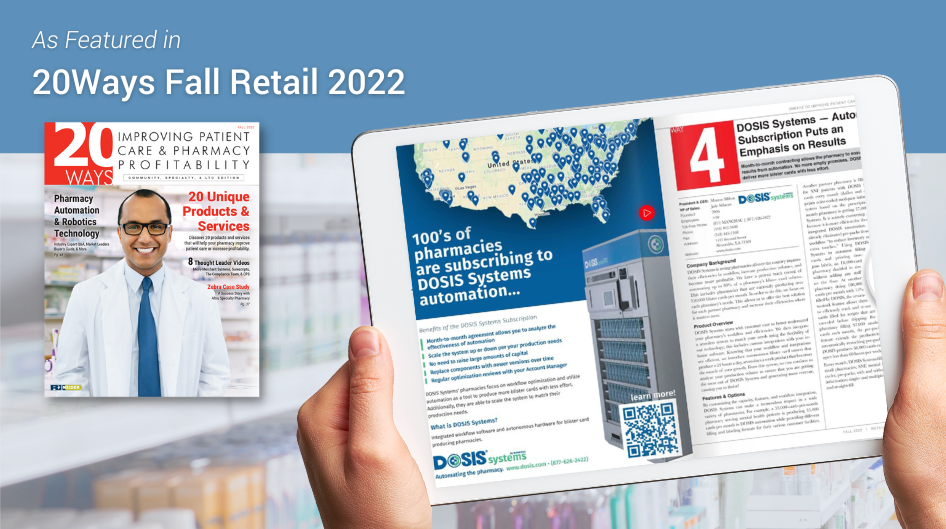 Month-to-month contracting allows the pharmacy to ensure they are getting results from automation. No more empty promises, DOSIS Systems works to deliver more blister cards with less effort.

DOSIS Systems is seeing pharmacies all over the country improve their efficiencies in workflow, increase production volumes, and become more profitable. We have a proven track record of automating up to 80% of a pharmacy’s blister card volume.  This includes pharmacies that are currently producing over 250,000 blister cards per month. In order to do this, we focus on each pharmacy’s needs. This allows us to offer the best solution for each partner pharmacy and increase their efficiencies where it matters most.

DOSIS Systems starts with customer care to better understand your pharmacy’s workflow and efficiencies. We then integrate a seamless system to match your needs using the flexibility of our technology; this includes custom integrations with your in-house software. Knowing that your workflow and integrations are efficient, we introduce autonomous blister card towers that produce a 24 hours a day, seven days a week product that becomes the muscle of your growth. From this system, we can continue to analyze your production volume to ensure that you are getting the most out of DOSIS Systems and generating more revenue, causing you to thrive!

By customizing the capacity, features, and workflow integration, DOSIS Systems can make a tremendous impact in a wide variety of pharmacies. For example, a 55,000-cards-per-month pharmacy serving mental health patients is producing 35,000 cards per month in DOSIS automation while providing different filling and labeling formats for their various customer facilities.

Another partner pharmacy is filling 250,000 cards per month for SNF patients with DOSIS Systems filling over 200,000 cards every month (dailies and cycles). DOSIS automatically prints color-coded med-pass information on every label in this system based on the prescription data. A 48,000-card-per-month pharmacy is getting 37,000 cards per month via DOSIS Systems. It is actively converting away from the cycle-fill model because it is more efficient for them to fill on-demand using their integrated DOSIS automation. They have already eliminated pre-packs from their workflow “to reduce inventory and extra touches.” Using DOSIS Systems to automate filling cards and printing time-pass labels, an 18,000-card pharmacy doubled in size without adding any staff on the floor. At another pharmacy doing 180,000 cards per month with 75% filled by DOSIS, the return-to-stock feature allows them to efficiently track and re-use cards filled for scripts that are canceled before shipping. For a pharmacy filling 97,000 on-demand cards each month, the pre-pack manager feature extends the productivity of the DOSIS Systems by automatically restocking pre-pack card inventory after hours — DOSIS produces 58,000 cards each month, and the pharmacy is open less than 60 hours per week.

Every month, DOSIS Systems fill over 3 million cards in large and small pharmacies; SNF, mental health, and corrections; dailies, cycles, pre-packs; with and without med-pass and auxiliary label information; single- and multiple-tablet per blister; calendar-start and straight-fill.