AON Pharmacy—Tools of the Trade for Keeping Patient Medication Stable 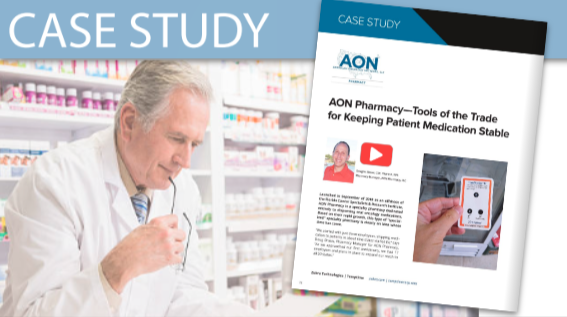 AON Pharmacy—Tools of the Trade for Keeping Patient Medication Stable

Launched in September of 2018 as an off shoot of the Florida Cancer Specialists & Research Institute, AON Pharmacy is a specialty pharmacy dedicated entirely to dispensing oral oncology medications. Based on their rapid growth, this type of “specialized” specialty pharmacy is clearly an idea whose time has come.

“We started with just three employees, shipping medication to patients in about nine states via Fed Ex,” says Doug Braun, Pharmacy Manager for AON Pharmacy. “As we approached our first anniversary, we had 17 employees and plans in place to expand our reach to all 50 states.” Like any specialty pharmacy, many of the medications they send to patients are temperature sensitive. “Some need refrigeration while others simply need to maintain a recommended temperature range to avoid degradation,” he explains. To monitor temperatures during shipment, AON opted for Temptime’s TransTracker® indicators from the start. TransTrackers are single-use devices that give patients a visual indication of whether or not their medication has gotten too hot or reached freezing temperatures during transit. The pharmacy includes a TransTracker in all shipments that require refrigeration. “We chose TransTracker because Florida Cancer Specialists were already using the technology,” says Doug. “We knew first-hand from their experience the value of the product as well as the good service Temptime provided.” This level of service, he says, is vital to AON. “Getting the right help from people we need to lean on is what matters to us.” That’s why when it came time to conduct performance qualification (PQ) testing with their packaging, the pharmacy turned to Temptime for guidance.

Adding new patients in states across the country means AON will be shipping to a greater variety of climates. “We wanted to be sure our shipments were maintaining proper temperatures so the medications we provide arrive within their stability profile,” Doug says. This was the impetus for their decision to conduct PQ testing. Having already achieved their ACHC accreditation, AON began the process to attain URAC accreditation as well. URAC’s current guidelines require pharmacies to conduct PQ testing annually or any time a change is made to their packout. “The difference is that ACHC simply wants to know that you have processes and procedures in place for monitoring and maintaining temperatures,” Doug explains. “URAC requires documented proof and reports that show the results.” It was important to AON that their PQ testing procedures resulted in data that was detailed enough to satisfy URAC’s requirements while also being usable and easy to interpret for the pharmacy staff.

“We knew what we wanted to do, but I wasn’t sure how to go about it,” says Doug. “Just out of the normal course of conversation with my rep at Temptime, I discovered that they offered third-party PQ testing services.”

In the end, Temptime recommended a two-phase process. During the first phase, Temptime sent EDGE® M-300 and S-400 temperature sensors to AON along with instructions for programming the sensors to monitor a specific temperature range.

AON followed their current SOP for packing and included the EDGE sensors within their packouts to monitor both internal and ambient temperatures. The packages were then shipped to Temptime HQ for an initial performance evaluation. Sensors recorded temperatures every 10 minutes from the time they left AON’s facility until they arrived at their final destination. Temptime then downloaded and analyzed the data from the sensors and provided initial data and feedback to AON. All shipments must maintain the temperature range being tested for a specifi ed duration in order to pass Temptime’s Phase 1 evaluation and move on to Phase 2. In the second phase of PQ testing, Temptime personnel visited AON onsite to assist with testing and documenting procedures. “Our Temptime rep observed our refrigerated packout procedure and made sure that we were putting the temperature sensors in the correct spot,” says Doug. “She also made sure the sensors were active, programmed with the correct parameters and ready to start recording data so that we would get the information we needed.” The pharmacy sent several test packages out to various locations and climates. Even though they send temperature-sensitive medications overnight, AON requested Temptime provide performance data for 48 hours to see what might happen in the case of shipping delays.

The biggest surprise for the pharmacy was that their packouts were really getting the job done. “I thought we’d see medication start in a normal range and then warm up some,” says Doug. “That didn’t happen – and if anything, some packages actually got colder than I expected for brief periods.” Still, no medications ever fell out of range. “The PQ testing was a great way to validate that our packages were configured properly and didn’t need modifications,” he says.

“We do know that as we expand our footprint, we are going to have to be prepared for all kinds of temperature extremes,” says Doug. “We hadn’t thought about medication getting too cold or freezing when we were only shipping throughout the Southeast.” AON plans to add additional packout configurations that protect both refrigerated and room temperature medications shipped to colder climates, into Alaska for instance. The pharmacy has purchased EDGE M-300 and S-400 programmable temperature sensors from Temptime to use for future internal PQ testing since URAC doesn’t require that testing be conducted by a third party. “We found the EDGE sensors super straightforward to set up,” Doug explains. “We had no issues, no need to call tech support – everything was easy and worked well. That’s exactly what we were looking for.” They plan to wait until winter before testing any new packouts. They’ll also conduct PQ testing regularly, both to ensure they are meeting patient needs as well as to comply with URAC accreditation requirements. Right now, the pharmacy only uses TransTracker for monitoring heat exposure. “I expect we’ll be evaluating if we want to monitor both heat and freeze events based on our expansion plans,” he says. It just makes sense to give patients that peace of mind since exposure to both excessive heat or freezing temperatures can be detrimental to medication stability. “We explain to our patients what they’ll be getting and what they need to look for before we send them their medication.” So far, they’ve had no patients calling in to say medication has gone out of range. Doug says this is critical to AON since the oncology medications they distribute can cost anywhere from $7,000 to $20,000. “Having to replace even one shipment would have significant financial consequences for us not to mention inconveniencing our patients.” Confirming that their packouts worked as needed wasn’t the only validation AON got out of the PQ testing. “Working with Temptime through this process just solidified my confidence in them,” Doug says. “We’re in this day and age where customer service is lacking. It’s become the new norm, but not with Temptime. When I call, I get a callback – usually the same day. If they say they are going to do something, they follow through. It’s refreshing.”