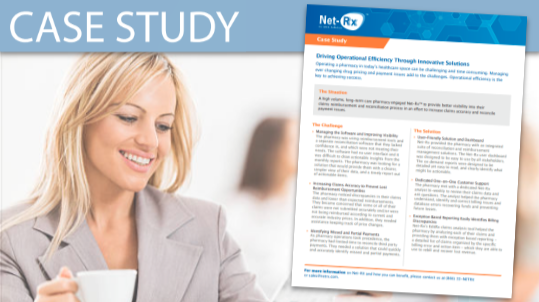 Operating a pharmacy in today’s healthcare space can be challenging and time-consuming. Managing ever-changing drug pricing and payment issues add to the challenges. Operational efficiency is the key to achieving success.

A high volume, long-term care pharmacy engaged Net-Rx™ to provide better visibility into their claims reimbursement and reconciliation process in an effort to increase claims accuracy and reconcile payment issues.

- Managing the Software and Improving Visibility

The pharmacy was using reimbursement tools and a separate reconciliation software that they lacked confidence in, and which were not meeting their needs. The software had no user interface and it was difficult to draw actionable insights from the monthly reports. The pharmacy was looking for a solution that would provide them with a clearer, simpler view of their data, and a timely report out of actionable items.

The pharmacy noticed discrepancies in their claims data and lower than expected reimbursements. They became concerned that some or all of their claims were not submitted accurately and/or were not being reimbursed according to current and accurate industry prices. In addition, they needed assistance keeping track of price changes.

As pharmacy operations took precedence, the pharmacy had limited time to reconcile third party payments. They needed a solution that could quickly and accurately identify missed and partial payments.

Net-Rx provided the pharmacy with an integrated suite of reconciliation and reimbursement management solutions. The Net-Rx user dashboard was designed to be easy to use by all stakeholders. The on demand reports were designed to be detailed yet easy to read, and clearly identify what might be actionable.

Net-Rx’s EditRx claims analysis tool helped the pharmacy by analyzing each of their claims and providing them with exception based reporting - a detailed list of claims organized by the specific billing error and action item - which they are able to use to rebill and recover lost revenue.

The pharmacy used the AWP (Average Wholesale Price) Verification report to keep track of AWP changes and update their drug records when automated processes fail. The report minimized losses and ensured that future claim submissions, even for non-electronic claims, were correctly priced. Additionally, eligible claims identified by the analyst were rebilled for higher reimbursement.

The AWP Retro Report identified claims not paid according to the most recent AWP due to a lag by the payer in updating their internal records. These claims were tracked by Net-Rx and when the payer updated their files, the pharmacy rebilled them to capture the additional reimbursement.

The pharmacy regularly viewed the Aging Report, an automated, transaction level report that identified unpaid and underpaid claims as well as funds taken back by the payer. It gave the pharmacy better insight into their cash flow, and made it clear which claims needed to be addressed and why.

The pharmacy owner was pleased with Net-Rx’s dashboard and the various reports available. While initially reviewing all of the reports personally, and relying on the Net-Rx analyst, now members of the pharmacy staff run and analyze reports independently and require limited support from the Net-Rx analyst.

In a two year period, the pharmacy was able to rebill over 400 claims and recover almost $30,000 in revenue. With each month’s reports, the corrected billing issues prevented future losses on refills. Corrections to claims that had refills led to a projected revenue increase of nearly $70,000.

Net-Rx’s aging report improved the pharmacy’s visibility into payments by helping them to track payments and reduce lost revenue. As a result, the pharmacy was better able to manage their cash flow and make informed spending decisions.

For more information on Net-RX and how you can benefit, please contact us at (866) 33-NETRX or sales@netrx.com.