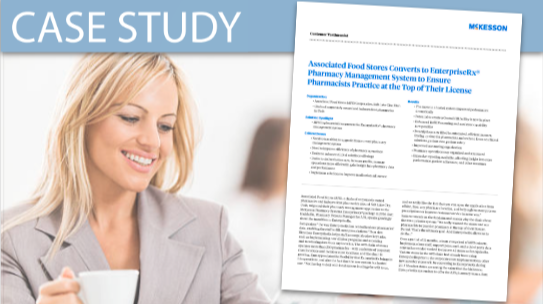 - Chain of corporately owned and independent pharmacies in Utah

-Need to transition to upgrade from current pharmacy management system

-The move to a hosted system improved performance dramatically

-Potential to create a Central Fill facility is now in place

Sam praises “the way EnterpriseRx has centralized our pharmacies’ data, enabling the staff to fill more prescriptions.” Sam also likes how EnterpriseRx helps staff accomplish other key tasks, such as implementing new clinical programs and accessing and monitoring data from any location. The AFS chain of stores operates more than 200 pharmacies – with a mixture of corporate store locations and member store locations, and the chain is growing. Sam appreciates the flexibility that EnterpriseRx brings to his operations, and also the fact that the new system is a hosted one. “Not having to deal with local servers is a huge benefit to us, and we really like the fact that you can open the application from offsite, from any pharmacy location, and help a given store process prescriptions or improve customer service in some way.” Sam comments on the fundamental reason why the chain chose the EnterpriseRx system: “We really wanted the stores and our pharmacists to practice pharmacy at the top of their license. Period. That’s the ultimate goal. And EnterpriseRx allows us to do that.”

Over a period of 11 months, a team comprised of MPS trainers, implementations staff, support personnel, and a third-party data conversion vendor worked to convert 42 stores to EnterpriseRx. Various stores in the AFS chain had already been using EnterpriseRx prior to the corporate store implementation; other new member stores will be converting to EnterpriseRx during 2017. Member stores are seeing the value that the McKesson EnterpriseRx system has to offer the AFS pharmacy teams. Sam reports that the transition of 42 stores was “extremely smooth.” The project started in January/February 2016 and was completed by mid-November. While converting 42 corporately owned stores, “only 2 stores experienced minor bumps during the conversion process, and we were able to address those very quickly, in less than 24 hours. The hiccups did not significantly impact filling prescriptions or servicing our patients, in either store.”

Sam lauds the implementation and training process that MPS put into place. “We had a lot of ‘pre-work’ to do, which at first I thought was overkill,” Sam said. However, it quickly became evident to him that “the McKesson staff thought about every little detail,” and were covering numerous issues that, from his point of view that, “he had not given prior consideration.” For example, “there were scores of settings that we had to discuss and work through during the pre-implementation meeting. These settings made our teams more efficient and kept them compliant with state and federal law. In the end, all the ‘pre-work’ we did made the implementation much more seamless,” Sam reports. “And, it allowed us to focus on solutions whenever we encountered a challenge and to respond to hurdles in an extremely timely fashion.”

A major component of the MPS implementation process is a ‘train the trainers’ program. The AFS trainers attended a three-day workshop given by MPS trainers in a live lab with twelve computers, enabling the AFS team members to learn the EnterpriseRx application. “Five AFS trainers were then able to go out and train other stores on the implementation and use of EnterpriseRx,” Sam reports. Weekly meetings over the 11-month transition allowed Sam and his AFS trainers to maintain consistent communication with the MPS implementations staff after the 3-day workshop concluded. “A constant loop was set up between McKesson, AFS, and our data conversion vendor. We were in constant contact with each other,” Sam says.

“To practice at the top of their license,” Sam explains, “we needed a system that would allow us to do a lot of little things more efficiently, quicker, faster.” The AFS chain had more than 70 items that they wanted their new pharmacy management system to handle, and EnterpriseRx filled most every need. For example, “It may seem small, but EnterpriseRx enables us to take a prescription called in through the IVR (Voice Recognition) and process it automatically all the way through to the dispense-stage—where in the old system, an Rx like that would just sit in the Inbound Communication queue until someone took the time to look at it. Having a Promise Time Workflow is a huge asset for us.”

Sam lists a number of other benefits that AFS stores are experiencing with EnterpriseRx. “Workload balancing is a tool we are using and highly appreciate on a regular basis. It allows us to transition portions of work from one location to another when one store is swamped.” Another feature of the EnterpriseRx tool is the Enhanced Refill Processing (ERP) capability, which helps pharmacists to sync medications together that might not have fill dates that occur on the same day. If medications are prescribed within a specified range, they can be filled together, allowing multiple prescriptions to be picked up by a customer at the same time. “This is one of the most vital tools in providing better clinical solutions,” says Sam. “Adherence is a major issue in pharmacy today, and ERP is just one tool we can use to help us address adherence problems.”

McKesson’s integrated software solutions drive pharmacy efficiency and profitability while helping you provide clinical services that empower you to be more actively involved in patient care. We give you the software and technology you need to spend more time with your patients leading to reduced costs, increased fills, improved outcomes, and better business health for your pharmacy