A Swiss plant constructor has set the industry benchmark with its filling line for hyaluronic gel. At the heart of the system is a Stäubli Stericlean robot that fills syringes with this anti-aging substance under sterile conditions. The uniVAL plc interface of the six-axis robot allows for convenient and direct programming by means of the Siemens PLC.

Hyaluron gel (HA gel) is widely regarded a miracle cure – a veritable fountain of youth for the skin. The way it works is by supplying the skin with moisture in a targeted manner. The gel is effective because just one gram of the basic ingredient, hyaluronic acid, can bind up to six liters of water. This produces a moisture reserve that gives the skin added elasticity.

No wonder the gel is in such great demand, and Zellwag Pharmtech AG – a subsidiary of the highly reputable Rychiger AG Group (Switzerland) – has developed a fully automated filling and sealing system specifically for the product. The Z-810 R-2 machine works under cleanroom conditions to fill syringes with HA gel and then seal them. Both processes take place under vacuum – an essential requirement, because the inadvertent injection of air under the epidermis would be extremely dangerous and must therefore be avoided at all costs.

With this project, Zellwag is operating well within its comfort zone, as the company, based in Frauenfeld (Switzerland), specializes in the development and manufacture of filling and sealing systems for the pharmaceutical, healthcare and cosmetics industries. Zellwag Pharmtech AG is known worldwide for the planning and construction of customer-specific multi-format plants and enjoys an outstanding reputation for the resource-saving and highly automated features of its systems.

Filling with cosmetic products under vacuum

In designing the Z-810 R-2 for a Russian manufacturer of cosmetic products, the priority for the Zellwag engineering team was to ensure bubble-free mixing, squeezing and filling. The gel is safely delivered to the filling line under vacuum and without any air ingress by means of an extruder press.

A further characteristic of the multi-format system is the high degree of flexibility. Nested and sterile containers with different formats such as syringes, vials and cartridges made of glass or plastic can be processed on one and the same filling line.

Sterile filling performed by a robot
Thanks to the widely acclaimed properties of the Stäubli TX2-90 Stericlean six-axis robot, it was possible to design a space-saving layout for handling syringes, vials and cartridges. A Tyvec-sealed tub containing one hundred prepared and sterile syringes arrives at the robot’s working area. A linear system peels back the Tyvec foil, and a second linear system then lifts out the nest of syringes.

The robot grips the nest containing the syringes, rotates it through 90 degrees and presents it to the filling station. The syringes are then filled two at a time, with the gel being extruded from a nozzle. After 50 cycles, all of the syringes have been filled. The ultra-dynamic Stericlean robot replaces them in the tub which is transported by means of a conveyor system to further processing stations.

Filling rates of up to 2,200 syringes per hour are achieved, the only limits here being set by the viscosity of the gel rather than by the technical capacity of the robot. Indeed, for watery media, up to 6,000 filling operations per hour are possible.

Custom-built for sterile conditions
The entire process takes place in a sterile environment – conditions under which the use of conventional robots would simply be unthinkable. Stäubli’s unique Stericlean robots are, however, at home in such environments. The series was specially developed for critical applications in aseptic production areas of GMP class A and has proven itself thousands of times over.

The kinematics of the Stericlean six-axis machines are fully encapsulated and sealed tight, with the cabling on the inside. There are no dead spaces, only smooth surfaces on which there is no scope for the formation of impurities. The unique specifications of these outstanding pharmaceutical robots make them resistant to the harshest of regular sterilization and decontamination procedures, for example with hydrogen peroxide (H2O2).

Integration in higher-level control system saves programming effort
Another special feature that is found across the entire TX2 series and is likewise beneficial in this application is the uniVAL plc interface. It enables the robot to be configured by means of programmable logic controllers as supplied by all reputable manufacturers – here a Siemens PLC. This eliminates the need for complex subsystems and interfaces that are difficult for programmers to familiarize themselves with, from configuration through to qualification. Operators can continue to work in their familiar environment without having to learn a new robot programming language.

Because Zellwag uses the TIA portal from Siemens, the workload is even less arduous. The Stäubli robot can be programmed on the Siemens engineering tool with reference to a TIA library. Because of the smaller number of subsystems and interfaces, this centralized system not only massively reduces the programming input but also enhances the functionality and efficiency of the filling line. It also offers the optimum conditions for process adaptations and format extensions, even after installation, as well as being open to new and growing requirements for data acquisition, data processing and qualification.

Ahmad Asraf, team leader for automation at Zellwag, is convinced of the merits of this integrated solution: “The application has made programming the system much easier. Without it, colleagues would have had to configure the robot separately for each container nest, thereby massively increasing the effort required. Right at the start, when we were programming for the first syringe nest, the application made a 30 percent saving in terms of time. For each additional container nest that we assign to the system, we are now proceeding twice as fast as before. Furthermore, the application is self-explanatory – a brief induction at Siemens was more than sufficient.”

With the Stäubli Stericlean robot, Zellwag has been able to implement a perfect solution for filling hyaluron gel under sterile conditions, in a compact space, with a high degree of flexibility and with minimal programming effort. The robot’s hygienic, pharma-compliant design and the uniVAL plc interface provided the essential prerequisites.

Advantages of the system at a glance:
• Robot design allows a simplified plant layout
• Central programming for enhanced functionality and efficiency
• Rapid process adaptation and format extensions, even after installation
• Reduction in subsystems and interfaces for streamlined programming and qualification 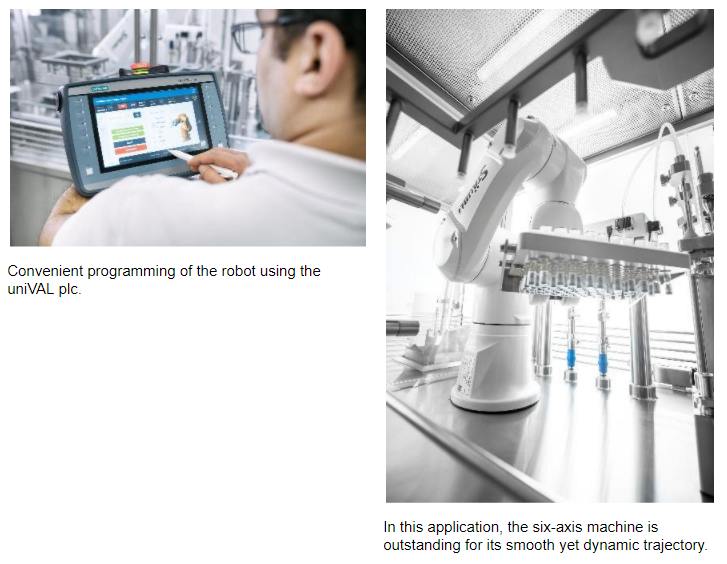 About the Stäubli Group
Stäubli is a mechatronics solutions provider employing 5,500 people in its three divisions: Connectors, Robotics and Textile. It aims to support its customers in boosting their productivity in a wide range of industries. Stäubli has a global reach, with more than 60 branch offices in 29 countries and 50 additional representations. Founded in 1892 as a small company in Horgen near Zurich, Stäubli is now a multinational enterprise with headquarters in Pfäffikon, Switzerland.
www.staubli.com

About Stäubli Robotics
Stäubli Robotics is a world leader in industrial automation, providing intelligent technologies and technical services of proven efficiency and reliability. The powerful, high-precision and user-friendly solutions from Stäubli Robotics include SCARAs, six-axis robotic arms and collaborative robots that have been designed to help customers in many sectors of the economy to meet the challenges of Industry 4.0, the fourth industrial revolution.
www.staubli.com