Delivering Peace Of Mind With Every Specialty Medication 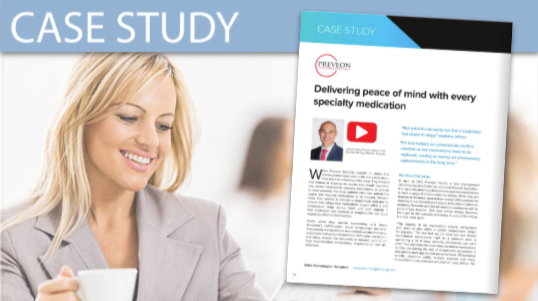 Delivering Peace Of Mind With Every Specialty Medication

When Preveon Specialty opened its doors, their primary patient-base was in the immediate area— most less than a two-hour drive away. They decided that instead of shipping via courier, they would have their own drivers hand-deliver specialty medications to patients in close proximity. For those patients who lived outside the region and required medications to be shipped, Preveon knew they wanted to include a temperature indicator to ensure that refrigerated medications stayed within a safe temperature range during transit and alert patients if their medication was exposed to temperatures that could negatively affect its effectiveness. That’s when they started researching and found Temptime’s LIMITmarker® visual temperature indicator. They quickly learned that all their patients wanted the same assurances and peace of mind the LIMITmarker provides— and today include the temperature indicator with all of their heat-sensitive medications, regardless of how it’s delivered.

In April of 2017, Preveon Health, a care management company based in California, launched Preveon Specialty— their specialty pharmacy division that dispenses medications to treat a range of inflammatory conditions. While they are licensed in 23 states, most of their nearly 2,000 patients live close by in the Inland Empire region of Southern California, including Riverside and San Bernardino counties as well as parts of Los Angeles. This, says Jefmar Dickey, Business Manager for the specialty pharmacy, is one of the things that sets them apart. “The majority of our medications require refrigeration and need to stay within a certain temperature range,” he explains. “The fact that we can have our own drivers hand-deliver medications right to a patient’s door is something a lot of large specialty pharmacies just can’t offer.” Not only does this mean they can deliver medications quickly, decreasing the risk of temperature excursions, it also adds a much appreciated personal touch. “Rheumatoid arthritis, ulcerative colitis, multiple sclerosis and many other inflammatory diseases are chronic,” says Jefmar. “So patients receive regular deliveries, usually monthly, and get to know the drivers personally over time.” Preveon did have a number of patients in other states and areas of California, however, so some medications would be sent using a package delivery service like FedEx or UPS. As a result, Jefmar began to analyze and document their entire cold chain process—both to get an understanding of how to most efficiently ship medications out of the local vicinity as well as for URAC and ACHC accreditation.

Based on industry best practices, Jefmar knew they would need some sort of temperature indicator for the medications they were shipping out. He had seen a few providers at Asembia’s annual conference the year before, so he started doing some research. “When I reached out to Temptime, they answered me right away,” he says. “They really broke the process down for me—even steering me in the direction of a more cost-effective, industry-standard solution over the one I’d originally thought we needed.” Preveon started including Temptime’s LIMITmarker heat indicators with their FedEx shipments. These single-use indicators are applied directly to the pharmacy’s heatsensitive medications and give patients an easy-to-read irreversible visual cue that lets them know if temperatures have gone above a certain threshold for an extended period of time, which may have caused damage to the medication. “With LIMITmarker, it’s easy for patients to confirm that their medications have stayed in the right temperature range,” explains Jefmar. “And even if they aren’t sure, we can tell them right away just by having them answer a couple of simple questions about the color of the indicator.” It wasn’t long before Preveon realized that they should be including a LIMITmarker on all temperature-sensitive medications—even those delivered by their drivers. “When we started hand delivering our specialty medications, we found patients were unfamiliar with the process,” says Jefmar. “They were used to getting medications shipped to them via FedEx or UPS and expected some sort of indicator in the package.” So even though medications came directly from the pharmacy and included icepacks, patients were still concerned about temperature exposure. “We didn’t have any way to validate the efficacy of the medications for them,” he says. This led to an increase in patient calls, expensive medication replacements and, in some cases, even insurance claims that typically required extra paperwork from the pharmacy. As a result, Preveon found themselves discarding and replacing medications they couldn’t confirm to be viable even though they might have been. That’s why within three months of launching the specialty pharmacy division, they began including a LIMITmarker with all their heat-sensitive medications, even if transit time was as little as 30 minutes. They also trained all their drivers to explain the temperature indicators to patients, even though they are extremely simple to interpret.

First and foremost, Jefmar says, including the LIMITmarkers in all their deliveries gave patients peace of mind. “Now patients can easily see that a medication has stayed in range,” he says. “It’s also helped our pharmacists confirm whether or not medications need to be replaced—saving us money on unnecessary replacements in the long term.” An unexpected advantage was that the decision to put LIMITmarkers on all their temperature-sensitive medications actually made workflows easier. “If the medication needs to be refrigerated, it gets a LIMITmarker applied to it as soon as it comes in,” Jefmar explains. “We no longer have to separate medications that are being shipped out from those scheduled for hand delivery.” Aside from efficiency and cost savings, having the temperature indicators in place is also an important part of the accreditation process. “Both URAC and ACHC want to see how we track medications and what our quality assurance processes are,” he says.

Preveon turned to Temptime to help with package performance qualification (PPQ) testing with their packaging as well. “For URAC in particular, we need to be able to validate that our packouts maintain the stability of medications in extreme conditions—both when delivered by our drivers or shipped via delivery service,” says Jefmar. Locally they can see temperatures as high as 110ºF. However, their packouts also need to perform in the colder climates of other states they ship to. For their PPQ testing, the pharmacy chose Temptime’s M-300, a Bluetooth®-enabled mobile sensor and datalogger. Using the mobile app, Preveon was able to monitor temperature readings and geolocation data via smartphone and tablet. In addition to viewing information on the app, data is also stored in the cloud, which was used to generate reports for accreditation compliance. During their first round of PPQ testing, the pharmacy found that some of their medications were getting too cold. “The results helped us adjust our packouts for more accuracy, and also gain more clarity on whether we could send certain medications via two-day delivery or overnight,” Jefmar says. Preveon successfully achieved both their URAC and ACHC accreditations.

Temptime offers a comprehensive range of temperature monitoring solutions to address the cold chain needs of pharmaceutical and medical device manufacturers, hospitals, blood banks, mail-order pharmacies and EMS providers. Customers use their chemical and electronic devices to monitor the storage and handling of medical products that improve and save lives. The company’s mission is to provide the tools and knowledge necessary to accurately monitor drug products and ensure that they have not been exposed to temperature events that could impact their effectiveness in treating patients. Temptime’s products include low cost, chemically-based heat indicators and freeze indicators for application to blood products, vaccines, sensitive biologics, and other medications. Their sophisticated electronic wireless temperature and humidity monitoring systems are equipped with low-energy Bluetooth® technology for cloud-based data storage and sharing, leveraging mobile technology.