Production of vaccines – with the help of Stäubli robots 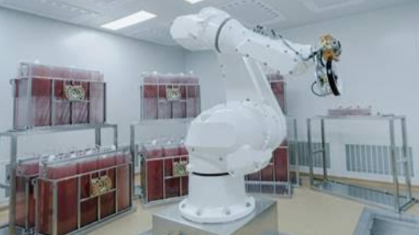 Production of vaccines – with the help of Stäubli robots

Shaken not stirred – robots in the cell factory

Chengda Biotech manufactures vaccines for rabies, encephalitis and other diseases. The vaccine is cultivated in cell factories: small trays which not need only handling but also oscillation flips, i.e. continuous movement in order to make the vaccine material reproduce itself. In a new factory in Benxi, Stäubli TX200 Stericlean robots fulfil these tasks. It is the first application of this type of robot in China’s bio-technological production.

The production of vaccines by means of biotechnology is a complex process that has to run steadily and under stable conditions. These are good pre-conditions for automation, which is exactly what Chengda Biotech has achieved.

The company whose full name is Liaoning Chengda Biotechnology Co. Ltd. Established itself in 2002 in Shenyang. Today, more than 800 employees are here producing human vaccines. The two main products being produced are a rabies vaccine (“ChengdaSuda”) and an inactivated encephalitis vaccine (“ChengdaLibao”), both produced in annual quantities of about 10 million copies. Furthermore, Chengda Biotech has successfully developed vaccines to fight other diseases like hepatitis A, HPV and influenza - all of which are manufactured using biotechnology. Here, the company makes use of a high-density bioreactor platform.

For the production of the hepatitis A vaccine, a new factory in Benxi was established. Its aim was to produce 3 to 4 million units per year  while making use of a high degree of automation.

Here, Shenyang Junbang Technology Co. Ltd. comes into play – a subsidiary of Liaoning Chunguang Pharmaceutical Equipment Co. This company, established in 1999 and located in Jinzhou City, has specialized in designing and manufacturing automated production and packaging solutions for enterprises in the pharmaceutical, food, and chemical industries. Shenyang Junbang´s focus is on robot-related applications.

A robot in the cell factory

At Chengda Biotech in Benxi, a great example of automating new production takes place – robots fulfil the sensible task of handling cell factories. These are frames with 160 trays contain a nutrient solution in which adherent cells are inoculated. The cells are growing, while the medium in the trays needs to be changed. In a second step, virus-infected cells and virus media are added. Finally, the virus – which is the highly effective vaccine – can be “harvested”.

The task for the Stäubli TX200 Stericlean robot is to grab these frames, which are manually pushed to the positioning point. In order to do so, the robot positions its arm in front of the frame where a vision system installed at the end of the arm detects the exact position where the clamp connects. For this task, a Stäubli connecting system is employed.

The TX200 Stericlean then handles the cell factory and places it at the operating site. While doing so, it carefully shakes the frame in order to distribute the liquid evenly. Then the robot deposits the frame at the scheduled place where the cells are growing.

Cell culture growth with the help of a robot

The robot performs a maneuver called an “oscillation flip”. Here, the robot regularly shakes and flips the product for long periods at different stages of cell culture. The entire cell culture process lasts more than ten days, with high requirements for robot stability.

At the stage when cells are added, the purpose of the oscillating movement is to evenly distribute the medium and the cells in the trays. At the fluid exchange stage, the cell fluid is poured with the help of the robot; at the virus harvest stage, viruses and cells in each layer are harvested, again supported by the Stäubli TX200.

One reason to automate this complex process was the desired stability of the environmental conditions, including the temperature. Because the robot reduces manual operations and the working environment temperature is unchanged from the entry and exit of the staff, it can better ensure the uniform stability of the finished product. Furthermore, then highest levels of cleanliness are achieved: The original process environment was GMP A + C. After using Stäubli robots, it was upgraded to the highest level, GMP A.

For obvious reasons, the production environment of the cell factories needs to be regularly – about once or twice a month – disinfected. For this process, Chengda Biotech uses VHP (Vaporized Hydrogen Peroxide). While this would not be possible with a normal robot, the Stäubli TX200 Stericlean is designed for such demanding environments, as its name denotes. The surface of this type of robots has a special coating, the key structure is made of stainless steel, and the entire housing is fully sealed. Therefore, this robot is resistant to hydrogen peroxide and other highly-efficient cleaning methods.

The advantages of automated vaccine production

From the viewpoint of Chengda Biotech, the robot-supported automated cell production also offers the advantage of reduced investment and operating costs. Following the installation of the robot, the number of CO2 incubators was reduced. At the same time, consumables such as protective clothing for the staff reduced, too, as well as the energy consumption of the temperature control.

Another point is safety and stability: As workers do not need to enter the factory room, the danger of contamination is minimized. With a temperature of 37°C and a 5% CO2 proportion in the breathing air, the conditions are far from perfect for the staff. Furthermore, the overall weight of more than 100 kg for a single cell factory frame simply requires some kind of automation. Chengda Biotech decided to fully make use of this principle, and systems integrator Shenyang Junbang has perfectly put this idea into practice.

Decision after careful consideration and comparison

In the design process, Shenyang Junbang and the decison-makers at Chengda Biotech benchmarked several types of cell production. Here, robot-supported production proved to be the best technology. In the second step, they reviewed the market of robots for such a critical and sensitive task. Director of biological vaccine production sums up the results: “The robot solution offers lower cost and higher efficiency. It occupies less space, the process design is more flexible and – what is most important – it guarantees a high and stable quality of the vaccine that we produce.“ The comparison between several robot types and brands came to the following result: “Stäubli Stericlean robots have an advantage in stability and they are the only robots that meet the GMP A level requirements. There are also many successful application cases in the pharmaceutical industry. In the experimental comparison, the use of these robots exceeded our expectations. Stäubli has also provided high-quality services and technical support – including pre-sales simulation, after-sales service and training.”

The exceeding of expectations led to a fast decision: Due to the research and the experiments, the customer's confidence in this solution and the Stericlean robots product had grown, so the order increased from two to three. It is the first successful application of a Stäubli TX200 Stericlean aseptic version in the domestic bio-pharmaceutical field. Stäubli China expects that other companies will follow this path of automation: At present, there are 48 vaccine companies in China, and more than half of them use cell factory processes which require handling and oscillating of the trays in which the vaccine is cultivated. 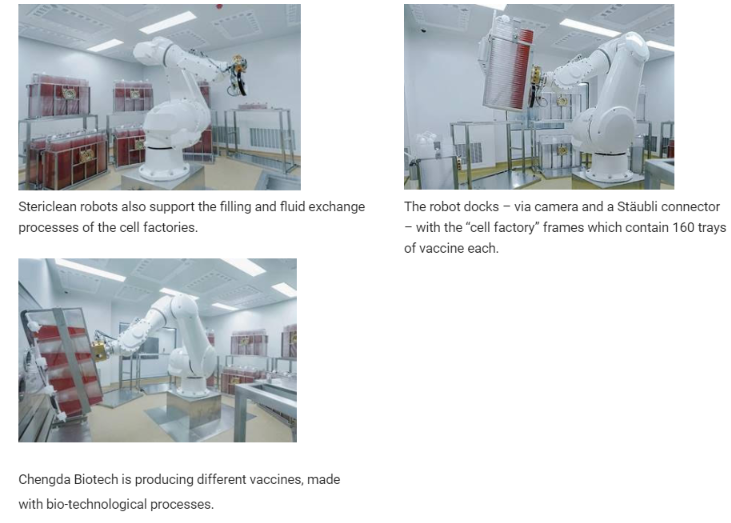