High-speed drug screening at the Genomics Research Center in Taiwan

High-speed drug screening at the Genomics Research Center in Taiwan

The Genonics Research Center in Taipei/ Taiwan uses an ultra-high-throughput screening (uHTS) device designed by the American manufacturer GNF. The fully automated machine is able to test 1536 substances in one cycle and a six-digit number per day. In the center of the machine which is used in 24/7 for developing COVID-19 medicines: a Stäubli robot.

In these days there is no doubt that finding new drugs and vaccines is a crucial task for mankind. The Genomics Research Center (GRC) in Taipei has committed to fulfil this task – with high expertise, profound scientific knowledge and also with high pace.

The public research institute, part of Taiwan´s renowned Academia Sinica, has enhanced and accelerated its drug screening capacity as a consequence of the SARS epidemy in 2003. The Academy made a heavy investment of 300 million Taiwan dollars and acquired a professional device for the so-called “ultra-high-throughput screening” (uHTS) of medical compounds.

uHTS means: An automated device is able to conduct ten thousand of chemical, genetic or pharmacological tests per day. This creates the pre-requisite for identifying bio-active substances which may be the starting point for designing new drugs and vaccines.

Using this advanced technology has already led to real positive results: With uHTS on board, the GRC has developed an effective anti-influenza drug in 2007. And it is no surprise and no secret that currently the GRC´s uHTS factory is focused on finding remedies for fighting COVID-19. So, uHTS marks the front-end process of a complete drug discovery procedure.

Screening drugs by millions – 1536 at once
The “machine” that is screening the drugs in Taipei was designed and manufactured by the American company GNF – a subsidiary of Novartis, concentrating on creating technologies for discovering new medicines. Their uHTS system uses a microplate – not bigger than the palm of a human hand – with 1536 drugs (each in a quantity of several µl) that can be screened in one cycle, taking about seventy minutes but overlapping as the next cycle can start when another one is already ongoing. All in all, more than 50 plates – that means 76.800 different substances –can be screened each day.

Why is such a speed necessary? Dr. PoHsun Lin at the GRC: “According to statistics, it is necessary to search for more than one million compounds to have a chance to find a lead compound.” This million of compounds can be tested within 650 cycles (1.000.0000 compounds, divided by 1536 drugs per microplate). It goes without saying that the “machine” is working in 24/7 mode with high speed and very high accuracy: The 1536 wells of the microtiter are extremely small.

All in all, the GRC stores up to 2 million compounds in its library, but not every project needs a complete screening. Dr. PoHsun Lin: “For the most common use, we keep around 100 microplates with 1536 compounds each in our library, including FDA approved drugs, known drugs, bio-actives, small molecular, natural products and representative compounds.”

In the center: One single robot – precise and versatile

Taking a look at the uHTS machine, the layout is obvious. Several stations for storing, commissioning, handling and screening build a cycle with a Stäubli RX160 robot in the center. This robot type is not only fast and precise, but also very versatile because it is – as can be seen in the uHTS machine – able to fulfil different handling tasks.

This is, step by step, the process: At first, the robot takes a plate from the incubator and puts it on the dispenser station. Here, protein is dispensed into the plate. In the next steps, the robot takes the plate with the 1536 drugs to a transfer station, an incubator, and two dispensers where further compounds and substances are added. Then the robots takes the ready-to-screen plate to a reader station for detection and delivers it to the station where the screening starts.

When selecting the robot, the engineers of GNF considered qualities like speed, accuracy and availability. Another obvious advantage is the longevity. The GRC acknowledges this benefit. Dr. PoHsun Lin: “Our uHTS system has been used successfully for many years, but it simply doesn’t grow old. The Stäubli RX160 robot is still on the cutting edge in terms of precision and dynamics and impresses with remarkable reliability. The system delivers top performance, efficiency, and stability.” This is why it can contribute to the crucial goal of COVID-19 remedy research in 24/7 mode – and why GNF today still uses Stäubli robots for their current models of HTS and uHTS screening machines. 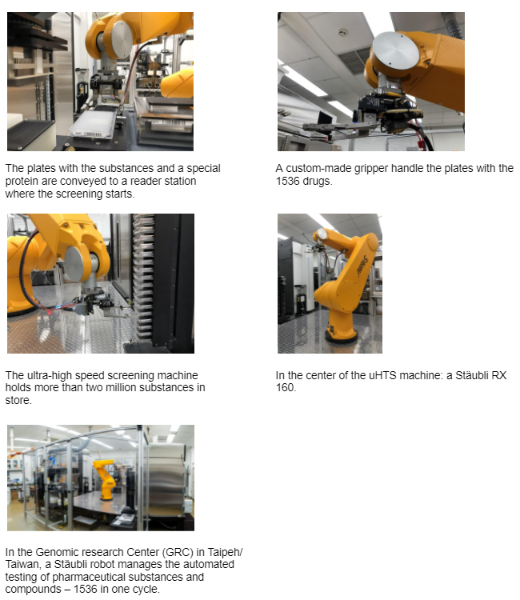