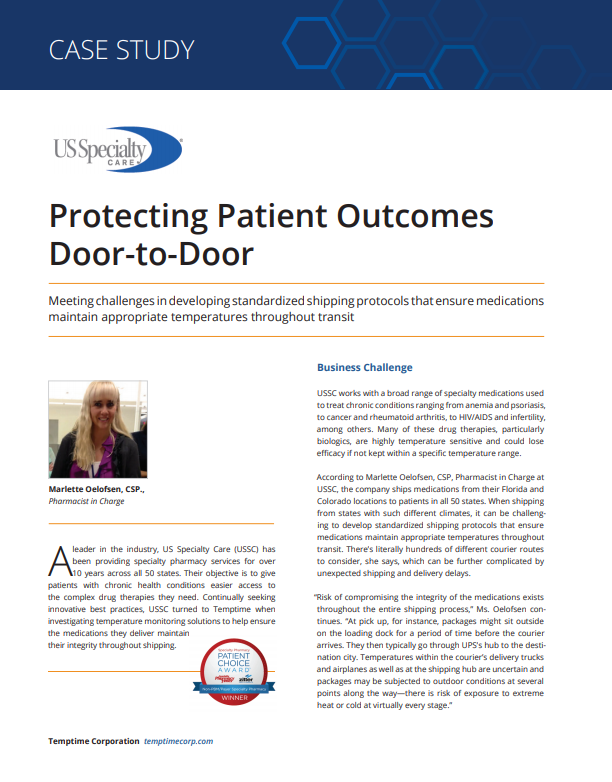 USSC works with a broad range of specialty medications used to treat chronic conditions ranging from anemia and psoriasis, to cancer and rheumatoid arthritis, to HIV/AIDS and infertility, among others. Many of these drug therapies, particularly biologics, are highly temperature sensitive and could lose effi cacy if not kept within a specifi c temperature range.

According to Marlette Oelofsen, CSP, Pharmacist in Charge at USSC, the company ships medications from their Florida and Colorado locations to patients in all 50 states. When shipping from states with such diff erent climates, it can be challenging to develop standardized shipping protocols that ensure medications maintain appropriate temperatures throughout transit. There’s literally hundreds of diff erent courier routes to consider, she says, which can be further complicated by unexpected shipping and delivery delays.

“Risk of compromising the integrity of the medications exists throughout the entire shipping process,” Ms. Oelofsen continues. “At pick up, for instance, packages might sit outside on the loading dock for a period of time before the courier arrives. They then typically go through UPS’s hub to the destination city. Temperatures within the courier’s delivery trucks and airplanes as well as at the shipping hub are uncertain and packages may be subjected to outdoor conditions at several points along the way—there is risk of exposure to extreme heat or cold at virtually every stage.”

USSC uses Temptime’s EDGE™ data loggers and TransTracker® CF visual temperature indicators to gain logistical insight into temperature controlled shipping methods and safeguard against the administration of medication exposed to potentially damaging temperatures. “As a pharmacist, patient safety is my primary concern,” says Ms. Oelofsen. “When we decided to incorporate temperature monitoring devices, we were looking not only for the best and most accurate devices but also for technology that was easy for the pharmacy to use and for our patients to understand.”

They began by conducting extensive performance qualifi cation (PQ) testing with their packouts using diff erent types of data loggers and temperature trackers to monitor the temperature of test shipments throughout their service area. “We found that Temptime’s EDGE M-300 and S-400 programmable data logging devices were easy and quick to set up—and provided us with detailed yet easily comprehendible data,” Ms. Oelofsen explains. “The EDGE M-300 has a replaceable battery, so it can be reused indefinitely, and since the devices communicate via Bluetooth®, you can change settings and view data even through packing materials.”

In addition, she says Temptime’s TransTracker CF temperature indicators are included in shipments to give patients a clear visual alert if the package has exceeded the temperature range during transit. They chose the TransTracker CF for its accuracy, also noting they were easier to use and interpret than others they tested. Some brands require indicators be manually activated before use, adding an extra step for the packing team and potential risk that someone might forget to activate the device – leading to confusion or false positives. Other indicators lacked simplicity in design and were diffi cult for patients to understand, increasing phone calls to the pharmacy. After considering all options, USSC felt that TransTracker CF was the obvious best choice for them.

“Without indicators, we would have no defi nitive way of knowing whether or not a package reached unsafe temperatures during transit – meaning any patient concerns about the temperature of their medication would result in a very costly reshipment for the pharmacy as well as delayed treatment for the patient.”

Temperature data for PQ testing was recorded by the EDGE M-300 sensor every 10 minutes over a 36+ hour period. Data was uploaded to EDGEVue™ App to generate this graph. Note the 46ºF High Limit (red line) was exceeded for approximately 2.5 hours.

To simulate actual shipments as closely as possible, USSC places expired medications within their packouts during testing. They test a wide variety of scenarios with numerous packout sizes considering diff erent points of origin and destination as well as various shipping routes used by the pharmacy. Packing instructions are precisely followed and  additionally include two EDGE data loggers that have been programmed to record temperature at predetermined intervals and provide alerts when particular temperature limits are exceeded. One EDGE device is placed inside the cooler by the medication to measure internal temperature. The second is placed ‘outside’ the package, either wedged in between the outside of the cooler and its surrounding corrugated box or in a padded envelope attached to the outside of the package to measure the external ambient temperature. Each test is replicated as a control for the fi rst, and tests are conducted several times a year to ensure the impacts of seasonal climate change have been considered.

“Both physicians and patients have told us how much they appreciate the extra measures we take to give them peace of mind with at-a-glance confi rmation that medications have remained viable throughout shipping,” says Ms. Oelofsen. “We now use TransTracker CF indicators with all refrigerated shipments and other high-risk medicines. Considering the critical nature of the medications we dispense and the unpredictable risks associated with shipping, we feel that it is the right thing to do for our pharmacy and our patients.”

USSC pharmacists counsel new patients on the importance of the temperature indicator and provide guidance on interpreting it as a part of the initial onboarding process. Additionally, literature is included with each shipment explaining how to read the indicator and what to do if it has triggered.

Temptime’s EDGE devices have also proven extremely valuable to USSC’s quality control processes. “It’s been a challenging year, with extreme temperatures seen across the country. This winter was one of the coldest on record and we had several concerns.” This led USSC to conduct testing, using the EDGE devices to pinpoint exactly what happens with shipments during extreme cold. “We thought packages were being exposed to freezing temperatures at their point of origin in Colorado, but because of the information we received from our EDGE data loggers – we discovered the issue was happening at the courier’s hub in Kentucky,” she explains. “With that knowledge, we were able to make educated changes to the packout and eliminate the problem.”

The result? USSC has successfully decreased the number of medication reshipments, delivering signifi cant savings for the pharmacy, reducing drug waste and improving patient satisfaction. Ms. Oelofsen says she feels confi dent they have the tools needed to make informed decisions about packouts.