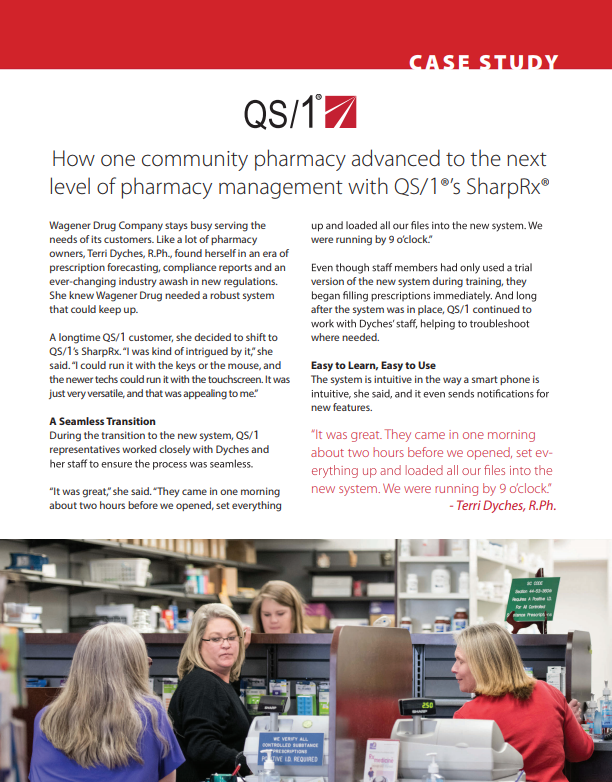 Wagener Drug Company stays busy serving the needs of its customers. Like a lot of pharmacy owners, Terri Dyches, R.Ph., found herself in an era of prescription forecasting, compliance reports and an ever-changing industry awash in new regulations. She knew Wagener Drug needed a robust system that could keep up.

During the transition to the new system, QS/1 representatives worked closely with Dyches and her staff to ensure the process was seamless.

“It was great,” she said.“They came in one morning about two hours before we opened, set everything up and loaded all our files into the new system. We were running by 9 o’clock.”

Even though staff members had only used a trial version of the new system during training, they began filling prescriptions immediately. And long after the system was in place, QS/1 continued to work with Dyches' staff, helping to troubleshoot where needed.

Easy to Learn, Easy to Use

The system is intuitive in the way a smart phone is intuitive, she said, an it even sends notifications for new features.

The techs like that SharpRx offers more than one way to accomplish a task, which allows staff members to use the system in multiple ways.

“With SharpRx, they can use it the way they like it. And that’s what’s so great,” she said.“It’s versatile to the operator.”

With SharpRx, reporting is now easier. In fact, after a recent audit by the state’s health department, one of Dyches’techs easily re-sent reports by using SharpRx’s built-in PMP reporting feature.

Pharmacy techs also like that they can manage and fill multiple prescriptions at once and juggle tasks without closing windows or losing their place, Dyches said.

“If Ms. Jones calls you while you’re putting in Mr. Smith’s prescription, you don’t even have to leave the page. You can also look at Ms. Jones' profile, which is wonderful,” she said.

And since she opted for the coud-based version of SharpRx, Dyches and her staff no longer have to worry about viruses or backing up files. "If we have a problem, we can call QS/1 and they've got all of our files right there" Dyches said.

Whether they’re inputting insurance information, conducting NPI searches or obtaining prior authorization, everything either auto populates or is just a click away, Dyches said.

“We can immediately add a patient by scanning their driver’s license. You don’t have to close any windows, and everything is accessible at the click of a button,” she said.“That saves a tremendous amount of time. It’s just so much easier.”

Overall, Dyches and her staff are pleased with the new system. "We've been very happy," she said. "This system can do so much. We're just at the tip of the iceberg as far as learning what it can do, and every day we learn something new."

What would she tell other pharmacists about SharpRx?

“We highly recommend it. Any problem that we’ve ever had has been totally resolved. And every person or pharmacist that’s come in here and looked at the system, I think they’ve made the change to SharpRx. They’ve been very impressed.”

A Company That Listens

In addition to feeling good about the switch, Dyches has been impressed with QS/1’s responsiveness.

“They cater to independents and it is very obvious,” she said. “It’s like they know what we’re thinking. They are concerned about us and being able to run our business. They’re just always there to help you.”

She also likes that the company helps her stay on top of industry changes and new regulations. “They listen,” she said. “They’ve always been helpful, but I think they’re even better now.”

Dyches feels confident both QS/1 and SharpRx will be able to help her business face any future needs it may have. “QS/1 is constantly keeping up with the times,” she said. “There is no doubt in my mind that this will be our last system.”