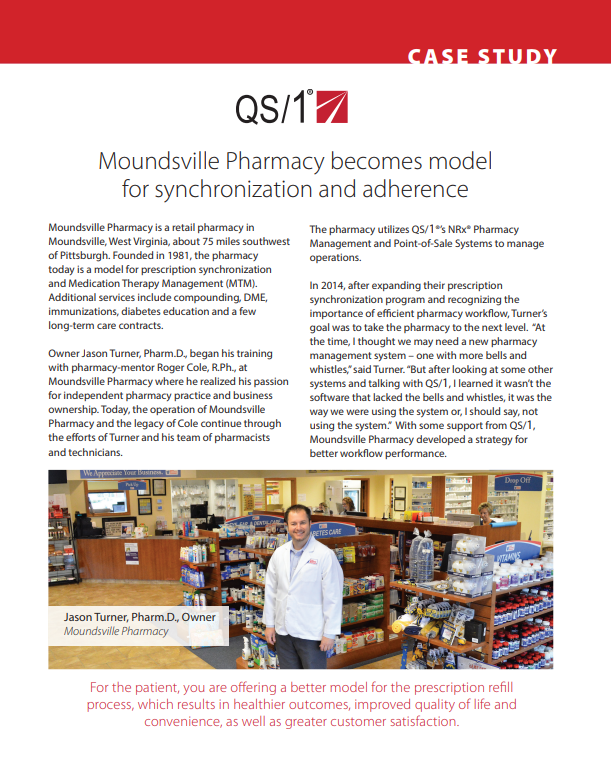 Moundsville Pharmacy is a retail pharmacy in Moundsville, West Virginia, about 75 miles southwest of Pittsburgh. Founded in 1981, the pharmacy today is a model for prescription synchronization and Medication Therapy Management (MTM). Additional services include compounding, DME, immunizations, diabetes education and a few long-term care contracts.

Owner Jason Turner, Pharm.D., began his training with pharmacy-mentor Roger Cole, R.Ph., at Moundsville Pharmacy where he realized his passion for independent pharmacy practice and business ownership. Today, the operation of Moundsville Pharmacy and the legacy of Cole continue through the eff orts of Turner and his team of pharmacists and technicians.

In 2014, after expanding their prescription synchronization program and recognizing the importance of effi cient pharmacy workfl ow, Turner’s goal was to take the pharmacy to the next level. “At the time, I thought we may need a new pharmacy management system – one with more bells and whistles,” said Turner. “But after looking at some other systems and talking with QS/1, I learned it wasn’t the software that lacked the bells and whistles, it was the way we were using the system or, I should say, not using the system.” With some support from QS/1, Moundsville Pharmacy developed a strategy for better workfl ow performance.

Turner said a key to Moundsville’s success was activating QS/1’s Workflow platform. “The Workflow feature created dramatic changes in our pharmacy operation. It made us more accountable and much more efficient in tracking and solving problems, checking prescriptions and ensuring prescriptions are handled properly and efficiently.”

Additionally, the staff quickly came to rely on QS/1’s Pharmacy at a Glance dashboard that allows monitoring of pharmacy workflow at any workstation. The tool enables you to quickly spot bottlenecks in quality assurance, processing, error resolution – and a number of other pharmacy functions you have the ability to monitor.

Turner also commented that the pharmacy’s increased use of QS/1’s Tickler feature, to schedule prescription processing and patient related tasks, has centralized the random patient and prescription notes in their pharmacy. This has also allowed them to reduce the amount of clutter on their counters.

And to tie it all together, for over 10 years, Moundsville Pharmacy has relied on the seamless integration of QS/1’s NRx Pharmacy Management and Point-of-Sale Systems. “I’ve found this integration to be very beneficial to the business in general, and to reporting in particular,” Turner offered. “It makes operating and managing a pharmacy very simple.”

With Star Ratings and quality measures becoming increasingly important in the pharmacy, Turner set a goal for improved adherence for the patients of Moundsville Pharmacy, convinced the key was prescription synchronization. He was right.

For the patient, you are offering a better model for the prescription refill process which results in healthier outcomes, quality of life and convenience, as well as greater customer satisfaction. As he said, “Imagine the experience patients would have if conversations about lack of refills, out-of-stock medications, prior authorizations and insurance issues were replaced by recommendations for therapies, suggested immunizations and education regarding their health and disease states?”

For the pharmacy, it means greater efficiency and lower operating costs per prescription – specifically, fewer incoming calls, reduced checkouts, consolidated deliveries, improved scheduling of staff, and more effective inventory management. Even better, it also generates greater prescription volume. With prescription synchronization focused on strategic workflow, the pharmacy is also able to spend more time with the patient to review medications for chronic conditions and help them identify meaningful opportunities for improving their health.

Moundsville relies heavily on the comprehensive tools of its NRx software to manage synchronization and the ensuing workflow. Two tools are HealthMinder® and InstantFill®. “Health-Minder tells us which refills are due, then InstantFill enables us to process those fills efficiently,” stated Turner.

With QS/1 technology handling workflow, Turner said his focus is on adherence scores and processes that will help improve prescription adherence. They are expanding their services as well as honing their counseling techniques to help patients experience the highest level of adherence and the maximum benefits from their medications.

To improve Five-Star Ratings, they review medication possession ratio (MPR) percentages in the pharmacy system’s patient record. The system provides reports on patients with less than optimal adherence. The Tickler feature enables scheduling of refills when they are due and Health-Minder contains a number of tools to monitor adherence, detect late refills and aid inventory management. The system also helps identify patients eligible for MTM.

After three years of focus on medication adherence, prescription synchronization and pharmacy workflow, Moundsville Pharmacy is a model for performance-driven workflow.

In 2013, Moundsville’s monthly prescription volume was 7,300. Today, its monthly volume has increased 22 percent to 8,800. By the summer of 2016, 850 patients were enrolled in the synchronization program. These patients account for 55 percent of the pharmacy’s prescription volume.

The pharmacy’s workflow has become a well-oiled machine. The staff processes synchronizations on Monday, completes Syncs on Tuesday, with delivery on Wednesday.

The pharmacy was recognized by OutcomesMTM® in 2014 as the “Top MTM Center in West Virginia” and completed 90 percent of Mirixa® CMRs in 2015.